The good Dr Raines tells us that thirty-one years ago, today Eddie Lawson won his first grand prix for the Rothman Honda team at the Spanish Grand Prix in Jerez. After winning three World 500 cc titles for Yamaha Eddie’s move to Honda for the 1989 season was a massive news story.

Behind the scenes Nick Harris was pulling the media strings before the announcement of Eddie’s defection to Yamaha’s great rivals Honda.

The phone rang very early one morning in December 1988. Either bad news or from Australia was my first thought as I picked up the phone to receive a right old ear bashing from  a furious Wayne Gardner at home in Wollongong. Did I know that Rothmans Honda had signed his bitter rival three times World Champion Eddie Lawson from Yamaha to be his new team-mate, he demanded. I did not know but I soon found out.

A couple of weeks later just before Christmas I was on the plane to Los Angeles with photographer Malcolm Bryan for a secret visit to Eddie in Uplands just outside LA. As Media Manager for the team I wanted to prepare everything for the announcement of the shock big signing in the new year. It was with more than a little trepidation we met Eddie the next morning in the lounge of the hotel decorated with Christmas trees and fairy lights. Nobody ever doubted Eddie as a truly great grand prix rider, but he could be ‘difficult’ with the media. I was worried that the extensive media campaign demanded by Rothmans would not be Eddie’s cup of tea, but I was wrong.

We had a wonderful and productive couple of days with the World Champion. Nothing was a problem for him as we photographed him running alongside a giant freight train in the desert, driving doughnuts on some vast salt flats and posing in front of his new house. We went out to dinner with his friends who honestly did not know he was a World Champion and a massive name in Europe because typically he had not told them. We flew home with everything we needed and more.

It was an amazing season with that first victory for the team at the fourth round in Jerez the start of the championship winning run. It was a scorching hot day with a typical vast noisy crowd packing every vantage spot around the legendary circuit. Kevin Schwantz looked a likely winner until he crashed, and Eddie took over to really kick–start his World Championship campaign in earnest. Wayne Rainey was second and led the Championship by ten points with Niall Mackenzie third.

Eddie followed up with wins in Belgium, France and Sweden before we set off for the party town of all-party towns, Goiania in Brazil for the final round of the 1989 Championship. Second place was enough for Eddie to join the greats by winning the 500cc World Championships on two different makes of machine. We partied and then Eddie returned to Yamaha with the job done.

He then joined Cagiva and brought them their first 500cc grand prix victory in Hungary before retiring at the end of 1992. Along with Phil Read one of the most underrated truly special riders in the 71-year history of the sport. Four World titles,31 grand prix victories say it all, not that Eddie would have ever told his mates back home. 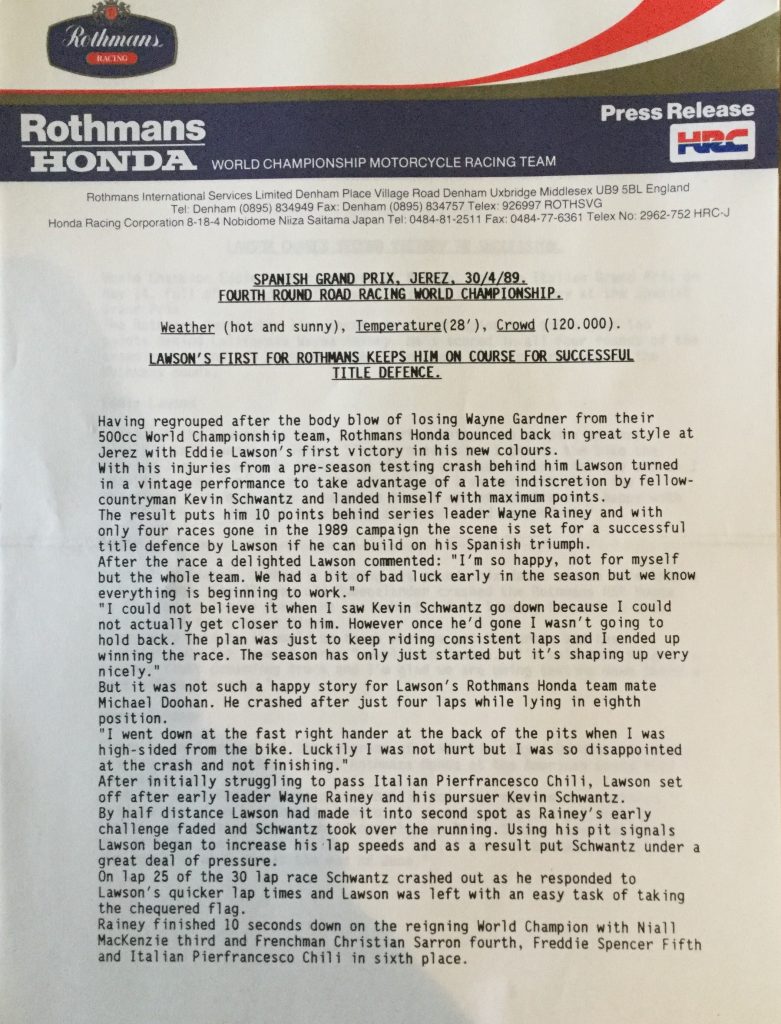 About the Author: Nick Harris